Our Troops and Veterans, Wounded Warriors and Families

“This is the first thank you I have ever received.”
—Words of a Vietnam Vet after receiving a Caring Coin as a thank you for his service to our country. There were tears in his eyes.

We can never underestimate the impact of a thank you!

There is a group of American citizens, the “most honorable,” who many would say do not get covered and compensated fairly for sacrifices they make in serving our country. Each of us know individuals, men and women, in our own families and among our friends and neighbors who have had stints in the military and struggle to put their life back together and find their place as civilians after serving. We, as a nation, are trying to do better but change takes time. We are not yet at a point where we can make a blanket statement saying “our countrymen and women who put service before self” are well rewarded nor are fair reparations made to their families who also give up so much. We can and must do better.

The first large group that Salley Gibney shared Caring Coins with was with 650 Vermonters leaving Vermont to go to Mississippi to train to go to Iraq. She heard on a Tuesday that they were leaving on Thursday. She contacted the commander and asked to talk with him. He said “Lady if you can find me you can speak with me…” She did find him and did send each of the 650 soldiers a Caring Coin with a letter from someone who cared about them.

The response was amazing. Many wrote and emailed that they were wearing the Caring Coins with their dog tags. More Caring Coins followed to the troops overseas through the Veterans Hospital and the National Guard. With the formation of YANAF (You Are Never Alone Foundation) Salley and the Board Members attended all of the pre- deployment and post deployment events in Vermont, sharing Caring Coins with each soldier and all of their family members. Needless to say this was a very touching experience. I Matter, You Matter Programs were adapted for the children of the troops with the help of professionals who were the knowledgeable about what these children were facing. As many families a struggled with reintegration issues, a suggestion that someone cared about them was greatly appreciated. It was an honor to meet these wonderful men and women of all ages who could be our spouses, sons, daughters, brothers, sisters and in some cases even our grandchildren. 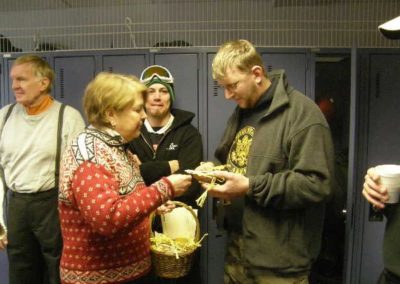 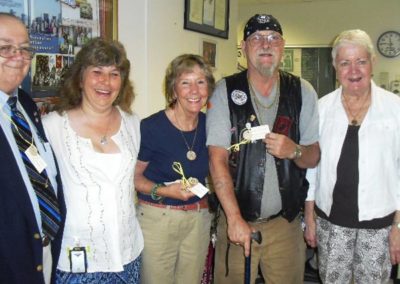 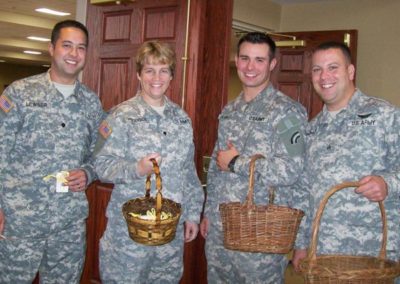 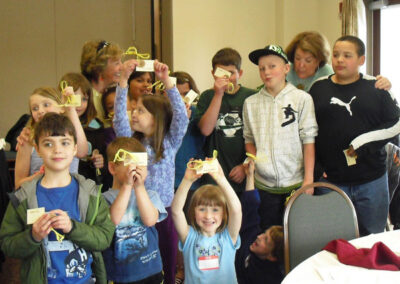 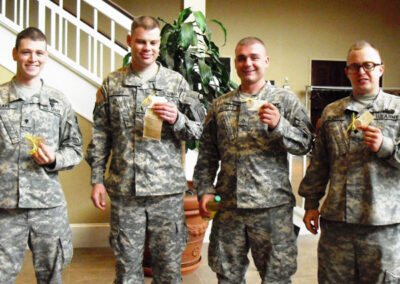 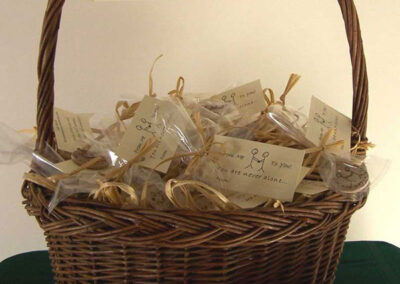 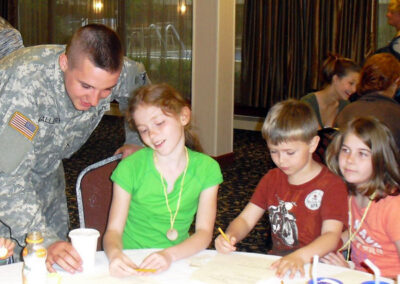 The following are some responses from our troops:

A veteran wrote “I’ve been lying here in bed thinking that I am the only person who is going through what I’m going through. Then I got one of these wooden coins that says You are never alone and I started thinking, I am not the only one going through this. I’m really not alone am I? Thanks to whoever it was that gave this to me…”

“I put my hand in a shoebox full of coin shaped medallions that were sent by kids at a church from home. I placed it on my dog tags. It was a cute little medallion with an angel on one side and the inscription You are never alone. On the other side was the signature of a child. The clear implication is that between the angel and the prayers of the child, I am never alone, even though I am in the middle of Iraq. What a wonderful and thoughtful message. About two weeks later, I wanted to take the time to write a thank you note to the class and decided to try to read the name. It was obviously challenging for the student to write on such a small medallion. It was not that clear and I had not paid attention when I first strung it on my dog tag chain. When I pulled it back out of my shirt and looked hard to focus, I realized that it was from a young boy who must be the grandson of my eighth English grade teacher and a good friend. The tradition lives on…”

A Commander writes: “This note about the Caring Coins was special because it was sign of possible continued connection and communication among people who sponsored the coins and vets who were far away. After all, what Vet does not like receiving a note from home!”

A Commander writes: “Coins were a big hit. Some folks even included their email addresses on the cards which will allow the soldiers stationed far away an opportunity to thank them and communicate via email. Thanks again for all your hard work. Your effort is appreciated.”

A volunteer helping to hand out coins to World War II, Korea, Viet Nam and Iraq at another Veteran’s Home: “Plenty of smiles on many a soldier.”

Intake person at the VA: “As an intake person at a VA Hospital, I have the opportunity to share the Caring Coins with the returning wounded. Some feel forgotten already. The Caring Coins remind them that someone cares. You can see the gratitude in their eyes. The Caring Coins are gifts of hope.” Equally fulfilling came a flurry of notes directly from the troops who were stationed elsewhere serving out their commitments.

A solder from Iraq wrote: “the angel coins went over really well in Iraq. People kept them on their desks at work, or in a pocket. It meant a lot to us to know people were thinking of us, and praying for us while we were over there. Having a small token to look at or carry around was good because it was a tangible thing to help us remember. I think that maybe the families of deployed soldiers might benefit from the coins as well. It could serve as a reminder for those that are away.”

A soldier: “My tour in Iraq has been very difficult…my angel coin reminds me I am not alone…I wear it with my dog tags.”

From a colonel stationed in Iraq: “I put my hand in a shoe box full of coins sent from kids at a church near home and placed it with my dog tags. Between the angel on the coin and the prayers of a child, I know that I am never alone, even though I am in the middle of Iraq. What a wonderful and thoughtful message.”

A volunteer at a Veterans Hospital writes: “I gave little gift packages to the in-patients at the hospital. A Caring Coin was included in the package. When I asked a patient if he had received that package. He said he had. When I asked what he thought of it, he said “there was this wooden thing in it that said “You are never alone”. When the volunteer asked what he thought of it, he said he had given it to his wife. Then after a few moments, he said “…you know I have been thinking about that saying “You are never alone. And I’m thinking that I’m probably was not alone in going through what I’m going through, I mean I’m probably not the only one with this disease. I’m really not alone am I? I kind of wish I hadn’t given that wooden thing to my wife…” I just happened to have another Caring Coin with me, which I gave to him”.

The Walk to Defeat ALS at the Vermont Veterans Home in Bennington, Vermont on Saturday, October 18th honoring the brother of our Founder who recently passed from ALS. Each participant at the Walk to Defeat ALS received an I matter…You matter Caring Coin to keep and one to share. More than 500 people participated. YANAF has participate in this Annual Event every year. This Event was very close to Salley Gibney’s heart as her brother-in-law, had been diagnosed with ALS and was a resident at the Veterans Home. Alan kept his Caring Coin with him and shared Caring Coins with his friends, their families and the staff the Veterans Home.

The Commemoration of the 50th Anniversary of the Viet Nam War…”honoring the Vietnam veterans, our fallen, our wounded, those unaccounted for, our former prisoners of war, their families, and all who served with appropriate programs, ceremonies and activities.” Following the Commemoration Ceremony, YANAF sponsored the I Matter…You Matter Event at the Vermont Veterans Home celebrating all Veterans and their families.

Wounded Warriors Weekend Caring Coins have been shared with the Wounded Warriors and their families and volunteers every January for the seven years. Warm smiles and love fill the room as volunteers thank our heroes for their service and the many sacrifices they have made for us and for our country. The Caring Coins are tangible reminders to them that they have not been forgotten.

Let us continue to remember and celebrate those who protect us.